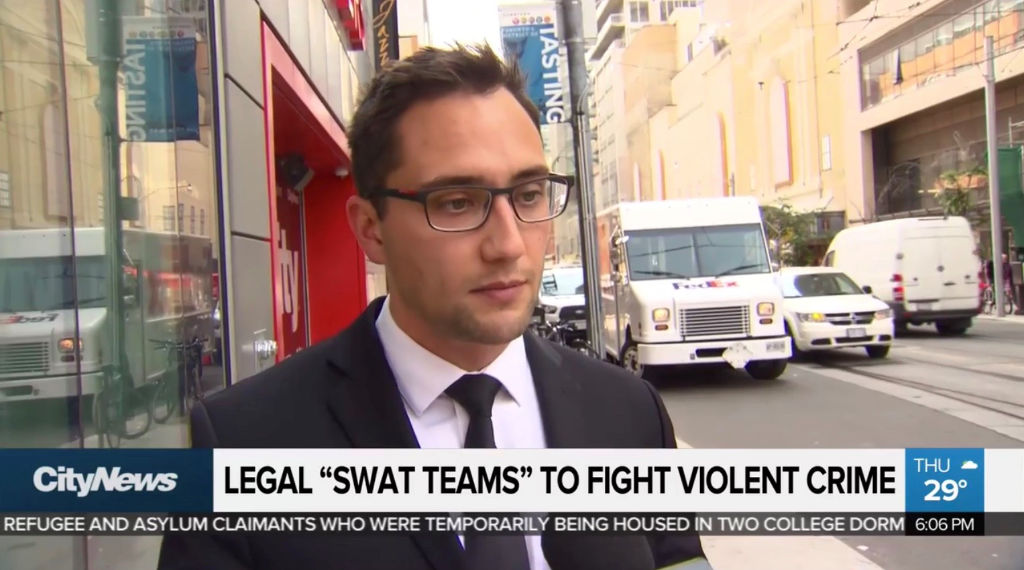 Donich Law has devoted a portion of its practice to representing those accused of assault and domestic assault. We have experience defending first time offenders, those with a previous criminal history and those who have been wrongfully accused or whose actions were justified.

In 2018, the Firm defended an individual charged with assault with a weapon in R. v. E.T. [2018], after the accused allegedly struck a child. The Firm negotiated for the withdrawal of the charge.

In 2017, Donich Law defended an individual charged with assault with a weapon in R. v. W.V. [2017], after the accused allegedly struck her domestic partner with an overcooked pizza, causing a laceration. The Firm was able to negotiate the withdrawal of the charge.

In 2016, the Firm defended an individual charged with assault with a weapon in R. v. P.T. [2016], after the accused allegedly threatened to assault their intimate partner with a kitchen knife. The Firm was able to negotiate for the withdrawal of the charge.

In 2016, the Firm defended an individual charged with criminal harassment in R. v. A.C. [2016], after the accused allegedly sent hundreds of text messages to an ex-partner after the breakdown of an intimate relationship. The Firm was able to negotiate for the withdrawal of the charge.

Global News: How difficult is it to get a legal handgun in Canada.

Are Assault and Domestic Assault the Same Thing?

Yes. Under the Criminal Code, all assaults, including those committed in the context of a domestic relationship are charged under section 266. There is no separate and distinct charge for domestic assault.

While there is no distinct offence for domestic assault, those who are charged with domestic assault may be prosecuted and sentenced differently than those who commit an assault in another context. Crown attorneys may choose to prosecute domestic assault cases more vigorously and may advocate for harsher penalties upon conviction.

What is a No Contact Order and Can I have it Removed?

A no contact order is a common condition placed on those charged with assault or domestic assault. The order prohibits the accused from contacting the complainant or any witnesses in the case. Contact of any kind is prohibited including indirect contact or contact through a third party unless otherwise indicated in the order. This condition will be placed on virtually everyone charged with an assault or any other violent offence.

In domestic assault cases, a no contact order will prohibit intimate partners, including cohabitating couples and those who are legally married from contacting one another. The order will remain in place for the duration of the case or until the Court orders otherwise. This can leave couples unable to live together and may force the accused to find alternate accommodation until the case has resolved.

Will a Domestic Assault Charge Impact my Family?

In many cases, yes. As outlined above, when a domestic assault charge is laid, the Court will impose a no contact order on the accused, prohibiting them from contacting the complainant or any other witnesses to the alleged offence. This can leave family members and even married couples unable to contact one another for lengthy periods of time.

If the accused and the complainant share children, the no contact order can further complicate family life. If the couple resided together prior to the alleged assault, the accused will likely be forced to seek alternate accommodation until the order is removed.

Donich Law has experience negotiating with the Children’s Aid Society and Crown attorneys to reunite families where appropriate in domestic assault cases.

How to get Domestic Assault Charges Dropped in Barrie?

Having domestic assault charges “dropped” or withdrawn can be difficult in many cases an impossible in some cases. Once criminal charges have been laid, only the Crown attorney has the ability to withdrawal them.

The Crown may also agree to withdrawal the charges against an accused where it is not in the interest of justice to give the accused a criminal record. For example, in cases involving the most minor assaults, the Crown and/or Court may determine that the assault was “de minimus” and should not result in a criminal record for the accused. In these situations, the Crown may agree to withdrawal the charges outright or after certain conditions are met.

Can I Drop Domestic Assault Charges Against Someone?

As a general rule, no. Once the police have filed domestic assault charges against someone only the Crown can choose to “drop” or withdrawal the charge(s). The Crown will generally not agree to withdrawal charges, especially domestic assault charges, at the request of the complainant. While the Crown will usually not agree to drop the charges, in some cases it may be difficult to prove the charges without the cooperation of the complainant.

What are Potential Sentences for Domestic Assault in Barrie?

More commonly, those convicted of assault or domestic assault are sentenced to far less than the maximum penalty. Depending on the severity of the allegations and the criminal history of the accused, those convicted of simple assault may be granted a discharge, may be placed on probation, ordered to complete community service, ordered to pay a fine or restitution, or serve a custodial sentence less than the maximum term.

If you have been charged with assault or domestic assault it is important to contact and consult with experienced legal counsel immediately. Donich Law has experience defending those charged with an array of assault offences and regularly obtain favourable results for our clients.

Will I go to Jail for Domestic Assault in Barrie?

In some cases, yes. The Court will weigh the facts of the case, the accused's criminal history, the effects on the complainant and any other relevant factors to determine the appropriate sentence for an accused. Where the allegations are serious, injuries resulted to the complainant, or the accused has a history of violence, a sentence of incarceration becomes more likely.

Can my Partner Drop the Charges Against me?

No. Once the police have laid domestic assault charges the only party who may withdrawal them are the Crown. The Crown will not agree to withdrawal domestic violence charges at the request of the complainant alone. Only in situations where the Crown believes it is not in the interest of justice to prosecute the individual, or where there is no reasonable prospect of conviction will the Crown agree to withdrawal domestic assault charges.

What if my Domestic Partner Recants their Story?

If a complainant in a domestic assault case recants their story it does not mean the Crown will withdrawal the charges. The Crown may continue with the case against the accused using other evidence they have gathered.

Does a No Contact Order Prevent me from Seeing my Children?

Can I get a Peace Bond for Domestic Assault?

In some cases, yes. In cases where the allegations are minor or where there are evidentiary issues that would make the Crown’s case difficult to prove, a peace bond may be appropriate.

What is the Best Defence to Domestic Assault?

The best defence in any domestic assault case will depend on the specific allegations being made and the evidence in the possession of the Crown. Common defences that justify an assault are consent, reflex action, defence of person and defence of property. An accused who successfully launches one of these defences cannot be convicted of assault.

In some cases, it may be possible to have a no contact order altered or removed. To have such a condition altered or removed the Crown must be satisfied that the accused poses no risk of harm to the complainant or anyone else named in the order. Crown attorneys are often reluctant to remove no contact order conditions in domestic assault cases even where the complainant wants the condition removed.